The development of new methods to break and form specific chemical bonds will overcome major barriers to innovation in chemistry. Such tools will revolutionize our capabilities to synthesize designer pharmaceutical drugs and process feedstocks into more useful molecules on industrial scales. Nature has derived solutions to similar problems by evolving enzymes with active sites that provide carefully optimized environments for molecules to bind and undergo directed chemical steps. Constructing a programmable environment, not unlike the binding pocket of an enzyme, inside which molecules react differently than they do in the outside world would be a holy grail for chemistry. Ideally, the features of this environment could be dialed in by a researcher “tuning a knob” in the laboratory, to switch between desired reaction pathways on-demand and activate or protect certain chemical bonds. The emerging field of polariton chemistry − using strong light-matter interactions to fine-tune molecular properties and behavior − offers a potentially paradigm-changing means to build exactly such a sandbox for directing chemical reactions. Polaritonic devices that engineer so-called “strong light-matter coupling” can significantly alter reactivity and can be readily integrated into scalable microfluidic reactors.

Polaritons are Schrödinger’s cat-like superposition states with hybrid light-matter character. Polaritons inherit the wavelike nature of light while maintaining local molecular interactions and structure. It should therefore not come as a surprise that the reactivity of polaritonic molecules may be quite distinct from their ordinary uncoupled counterparts. Polaritons can be engineered by placing molecules within an optical cavity constructed from two reflective mirrors. This cavity creates a locally trapped field of light, or cavity mode, whose wavelength is determined by the distance between the mirrors. When the cavity mode is tuned to coincide in energy with a specific molecular excitation, the molecule’s excited state and cavity’s light field mix, or strongly couple, to form two new hybrid polariton states. This process is analogous to two atomic orbitals mixing to form molecular orbitals with new properties. Crucially – and somewhat counterintuitively! – strong light-matter coupling can occur in the dark, as molecules interact with fluctuations of the quantum vacuum field, a ubiquitous background of light that persists even in seemingly empty space. Polaritons can therefore be created without pumping the cavity with external light. The vision of using fields of light to steer molecular reactivity is longstanding, but the use of the dark vacuum field is a radically new platform by which to pursue this aim, particularly under the warm condensed-phase conditions in which real-world chemistry occurs.

While it is becoming clear that strong light-matter coupling can provide a handle by which to steer the paths of chemical reactions, the detailed rules by which this handle operates remain unclear. Deriving this set of rules is crucial to building practical polaritonic reactors. The Weichman Lab is working to build a detailed picture of molecular polariton reactivity by establishing a new body of experimental work to validate theories of cavity-modified chemistry and unlock polaritonic platforms for practical chemical applications. These problems demand surveys of computationally-tractable, strongly-coupled reactions with experimental methods that can directly track the time-dependent populations of reactants, transient intermediates, and products in specific quantum states. We are using ultrafast and precision spectroscopic methods to follow the dynamical trajectories of elementary condensed phase reactions and low temperature gas-phase reactions under strong coupling. Our measurements will provide a bedrock for understanding how the simplest bonds are formed and broken in strongly-coupled environments, ultimately informing the design of complex cavity syntheses.

High-resolution spectroscopy is a powerful tool to reveal the rich internal structure of small molecules in their electronic, vibrational, rotational, and spin degrees of freedom. Extending this level of characterization to systems of transitional nanoscale size, on the brink of treatment with standard molecular tools, is becoming possible using novel optical and cold molecule technologies. We plan to use cavity-enhanced frequency comb spectroscopy and buffer gas cooling for quantum-state-resolved characterization of nanoscale systems in order to bridge our understanding of small molecules with that of emergent phenomena in extended materials. 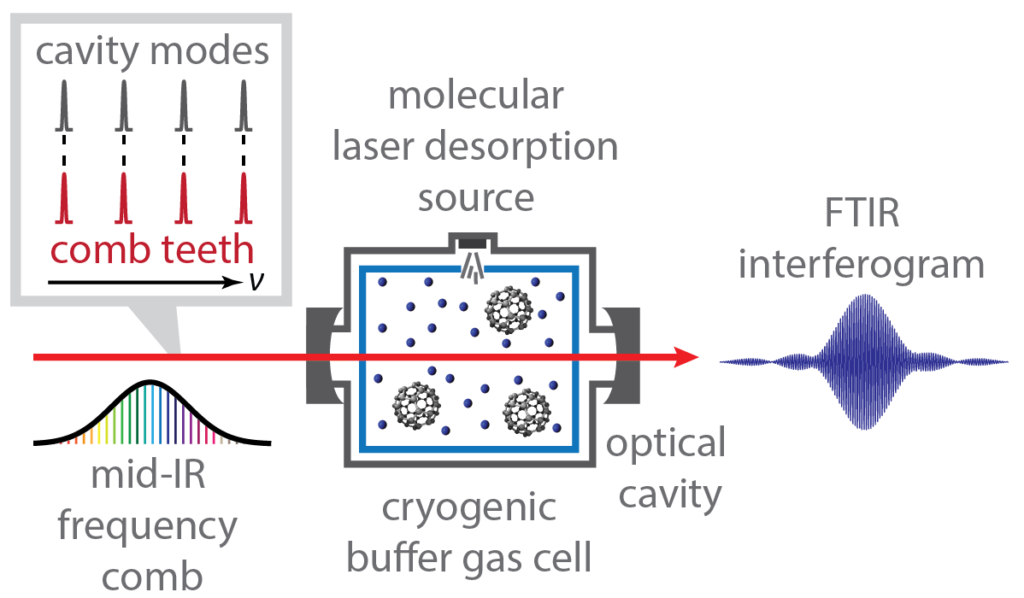 Achieving state-resolved spectroscopy in large molecules is subject to demanding experimental requirements. The need for a sensitive, high resolution, and broadband spectroscopic tools can be met using frequency combs, stabilized mode-locked lasers whose frequency spectra consist of thousands of evenly spaced, narrow “comb teeth.” Cavity-enhanced frequency comb spectroscopy (CE-FCS) matches a comb’s spectral lines to the modes of an optical cavity containing the absorber of interest. CE-FCS combines excellent frequency resolution limited only by the comb tooth linewidth, high sensitivity via cavity enhancement, and broadband detection across the comb spectrum. The Weichman Lab will build up capabilities for direct CE-FCS at near- and mid-infrared wavelengths.

In order to cleanly probe large systems in the gas phase, it is also essential to create a cold molecular sample of sufficient density. Large molecules can occupy millions of vibrational and rotational states at room temperature, yielding congested spectra that are difficult to resolve, interpret, and assign. By cooling isolated molecules to cryogenic temperatures, one can build significant ground state population and measure meaningful structure without obfuscation from hot populations. Collisions with a cold buffer gas inside a cryogenic buffer gas cell (CBGC) are a nearly universal method to achieve cooling, and can thermalize translational and rotational temperatures to 10-20 K. In recent work, the carbon-60 fullerene was cooled to 150 K, enabling a new record in spectroscopic quantum state resolution of a molecule of such large size and high symmetry. The Weichman Lab is working to develop a next-generation cryogenic cell coupled with a laser desorption source to achieve dense samples of large molecules at even lower temperatures.

Cavity-enhanced comb spectroscopy and cryogenic buffer gas cells are recently developed technologies whose combination will facilitate many avenues of future work. In the near term, we are interested in probing molecular endofullerenes as model systems for quantum confinement and guest-host interactions. We are also excited about a variety of future directions including state preparation of large molecules, laboratory astrochemistry, and aerosol chemistry.

We gratefully acknowledge funding from the following sources: